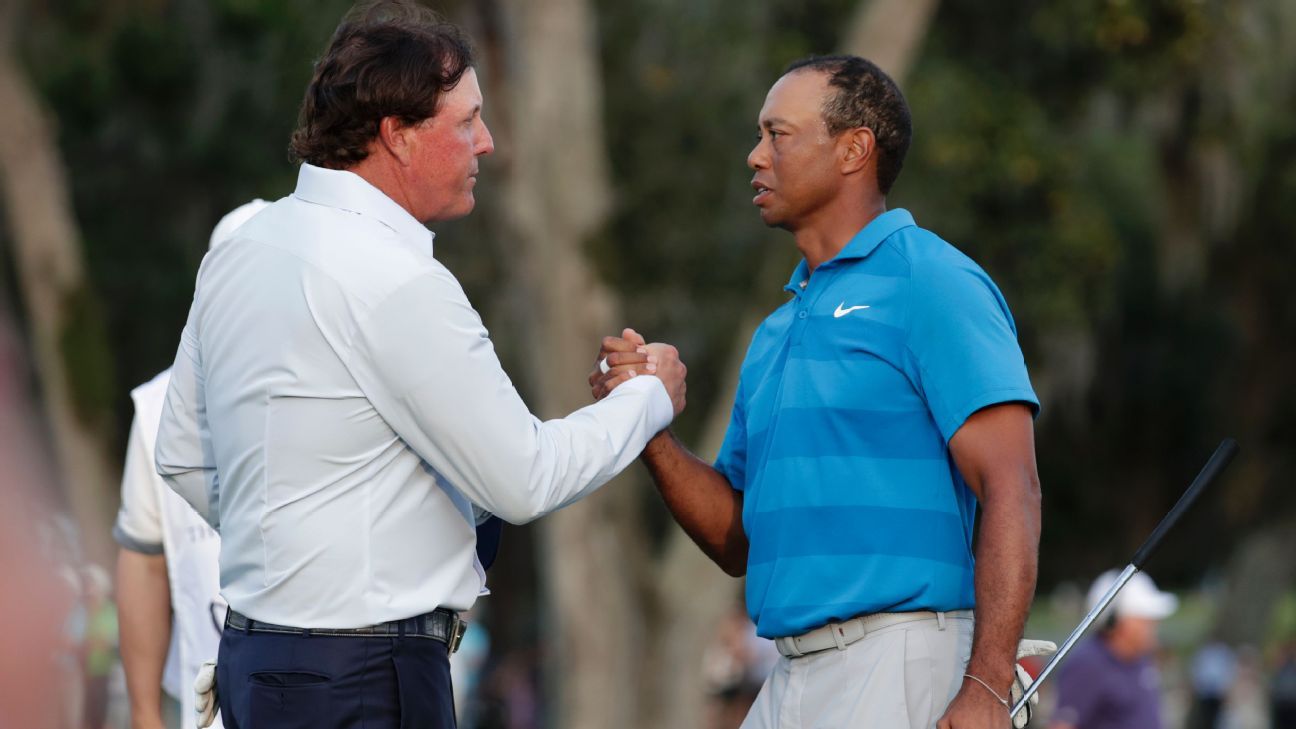 Two players, each easily defined by one name: Tiger. Phil.

As they finally get set to play in a made-for-TV, $9 million, winner-take-all match Friday at Shadow Creek in Las Vegas, our experts gathered to answer the most important questions, from the best possible side bets to the match they’d actually rather see and, of course, who wins this one:

Give me one good reason to watch?

Bob Harig: It’s Tiger and Phil. Say what you want about The Match and all the negatives associated with it, we are still talking about two iconic figures in the game who, while they might be past their primes, are still compelling figures. Plus, both won tournaments this year. At the very least, there should be a curiosity factor. Even if there is no longer the animosity between the two players, there remains a healthy amount of ego and competitiveness about them that suggests this could be interesting.

Michael Collins: I’ll give you three — Charles Barkley, Samuel L. Jackson and Pat Perez in the pregame show. Even if Tiger and Phil don’t talk smack, those three will be awesome talking smack about Phil and Tiger

Ian O’Connor: It’s pretty rare in any sport to see a generation’s two defining players go one-on-one in anything. Tom Brady and Aaron Rodgers got plenty of people watching their matchup for a reason, and yes, they were playing a game that counted in the standings. But I think most sports fans would watch Brady and Rodgers compete in a big-money skills competition while they were miked up for sound. Many years ago, I would’ve spent $10 to see Bjorn Borg and John McEnroe play an exhibition match at the end of their primes. Just as I’ll spend $20 Friday to watch Tiger Woods and Phil Mickelson play an exhibition match at the end of theirs (and I won’t even ask ESPN for reimbursement).

Kevin Van Valkenburg: At some point, one of them will pull off a shot that’s jaw-droppingly good. Even though the stakes are low, watching two of the best to ever do it pull off a miraculous recovery (or three) is going to be fun. And if by some chance it turns out to be a fantastic duel, you’ll regret you passed on it.

What side bet would you love to see during this match?

Harig: Simple: a wager on total fairways hit. Or, better yet, they pick a specific driving hole where the driver is required and challenge the other player to hit the fairway for whatever takes are on the line. Both players have struggled with this aspect of play, and hitting a fairway with the driver with more on the line than having a good lie in the fairway would be fun to see play out.

Collins: Last par-3, closest to the pin. Loser caddies the Par 3 Contest on Wednesday at the Masters.

O’Connor: Deep into the back nine, with the match tighter than Mickelson’s pants, I’d like to see Tiger standing over a tricky, left-to-right, 9-foot downhill putt before Phil steps in and says, “If you make this putt, I will give you my winnings from my next tour victory, or my earnings from my highest placement next season if I don’t win. If you miss this putt, you will extend me the same courtesy.” And then I’d love to see Tiger drain it before Phil staggers off to the next tee.

Van Valkenburg: Tiger and Phil switch clubs for one hole. Winner takes $100,000. Phil is a natural right-hander who swings lefty, so he might have the advantage. But Tiger has the best hand-eye coordination the game has ever seen. I wouldn’t make either the favorite. Play it straight up.

If you could pick one other match, involving any two players, who would you rather see teeing it up on Friday?

Harig: Jordan Spieth vs. Patrick Reed. We’ve still yet to really hear what happened in the aftermath of the Ryder Cup, when Reed called out Spieth, suggesting he didn’t want to play with him. That alleged feud led to a change in Ryder Cup teammates for several players and may very well have had some impact on the eventual outcome — or at least the lopsided manner of the defeat. Maybe Reed and Spieth could take it out on each other on the course.

Collins: Spieth vs. Reed. Call it “The Golden Child vs. The Shunned One.” While Spieth would try to play nice, Reed would be all up in there talking smack until Spieth snapped and went on a curse-filled tirade. You wouldn’t pay $20 for THAT?!

O’Connor: Spieth vs. Reed. Given that Spieth clearly filed for divorce before the Ryder Cup and broke up his near-perfect on-course match-play marriage with Reed — even if that marriage was defined by great chemistry and precious little love — a match-play monster like Reed would be out for blood, lots and lots of blood. Spieth’s golden-boy image has taken a direct hit, and he likely would feel very uncomfortable cast as something of a villain in Reed’s trash-talking presence. Tension is required for great individual duels, and this one would have an ample supply. Prediction: Reed by technical knockout.

Van Valkenburg: Reed vs. Rory McIlroy. Maybe I’m kidding myself thinking we’ll ever get a redux of what happened in the Ryder Cup at Hazeltine, but that was the most enjoyable match I’ve ever seen in person. Reed remains perpetually aggrieved and McIlroy has something to prove this year. Their contrasting styles and personalities would make it even more memorable.

Who wins more over the next year: Tiger or Phil?

Harig: Tiger. He seems better positioned to do so at this point. He’s coming off a year in which he not only won, but contended at two majors and had four other top-10s. After Phil’s victory in Mexico, he had just a single top-10 the rest of the year. Undoubtedly he will be motivated to improve in 2019, but Tiger is primed to win more.

Collins: Tiger will win more. I can’t give away how much because I spent so much time on my predictions (coming next week!) and I need y’all to go read it.

O’Connor: Tiger, hands down. He had a remarkable summer, all things considered, and then was completely exhausted after his Tour Championship victory. Fatigue makes cowards, and Ryder Cup disasters, of us all. Even after he missed the U.S. Open cut at Shinnecock Hills, I thought Woods would still win at least one more major — assuming his body holds up. He nearly went back-to-back at The Open and the PGA, so I see a two- or three-victory tour season for him in 2019, including his 15th major triumph at one of the three venues where he’s already won: Augusta National, Bethpage and Pebble Beach. Mickelson will win once, a non-major, if he’s lucky.

Van Valkenburg: Tiger. I think that’s a no-brainer. Phil’s belief that he’s going to get to 50 career wins seems like magical thinking. He would need to reel off about three a year over the next two years to have a shot, as age 50 looms large. (Maybe Phil was counting Champions Tour wins; who knows with him.) But Tiger has at least three more regular-season wins in him, and maybe all in one year. He spent all season figuring out his new swing. I suspect he’s got it figured out by now.

Prediction time … who wins this match?

Harig: For all the reasons that Phil is an underdog — lackluster play of late, a resurgent Tiger, etc. — I think he will win. Mickelson loves this challenge, and 18 holes of match play, with banter and side bets and the possibility for some gamesmanship, suits him perfectly. Mickelson has had an entire career of Tuesday practice-round match antics. He is perfectly suited for this type of challenge. While Woods will bring plenty of game, Phil squeaks this one out. 1 up.

Collins: Tiger wins 6 & 5, but they play out ’til the 18th hole for the side-betting action.

O’Connor: They were both dreadful in France, which does subtract a bit from this desert duel. In the end, Woods has been the far superior player over the course of their careers, and his 14-5 advantage in major titles identifies him as the much better pressure player. No, this isn’t the Sunday back nine at the Masters, and no, this isn’t going to impact either player’s legacy. But Woods has always considered himself an athlete first, a golfer second, and his competitive spirit won’t allow him to lose a one-on-one exhibition against someone he regards as a lesser athlete, golfer and closer. Tiger 2 & 1.

Van Valkenburg: Has anyone ever wanted to win a meaningless match worse than Phil wants this? I think he’s going to somehow pull it off. He chips in on 17 to square it up after trailing much of the day and wins 1 up with a birdie at the last.

It’s not PERFECT but this could change golf FOREVER
How to: hit PERFECT iron shots!
My BEST ROUND OF GOLF….so far! #Break75 EP3
I play golf LEFT HANDED | 1,000,000 SUBSCRIBER SPECIAL
Concept golf club from the FUTURE!